Something about Lulu Wang’s The Farewell feels familiar to me. This strikes me early on in the film, when we find ourselves in Changchun, the Chinese city in which much of the film takes place, via a series of wide-angle shots of various apartment buildings, endlessly tall and taking up much of the city’s landscape. Operating from the vantage point of the film’s protagonist Billi, who stares from inside a taxi, the camera eventually fixates on a single building, entirely nondescript and surrounded by identical structures. It is made clear, however, by Billi’s worried expression, that there is something different about this particular building. Billi climbs the stairs and enters into a small apartment, where her extended family, reunited in China after many years and assembled around her grandmother’s dinner table, staring at her in horror.

Nothing about Billi’s homecoming is conventional, but neither are the circumstances that bring it about. The Farewell is, as the opening text divulges, ‘[b]ased on an actual lie,’ one that Wang and her family told her grandmother in 2013 when the latter was diagnosed with stage 4 lung cancer and given only months to live. Choosing to withhold information of a critical diagnosis to preserve its recipient’s emotional well-being is a common practice in China, but one that 30-something Billi, who has lived in America since the age of 6, feels immensely conflicted about. She is told by her parents to remain in America as they travel to spend time with her grandmother under the guise of a family wedding. Instead, Billi follows them to China to see her beloved Nai Nai for what may be the last time.

Billi’s predicament is, thankfully, entirely foreign to me. Her surroundings, however, are not. I took an almost identical car ride, from a Chinese airport to a relatively small Chinese city, multiple times between 2003 and 2006. Zhongshan, where I lived, is much further south of Changchun, but the cities are nearly identical in infrastructure and atmosphere: towering apartment buildings, immaculately shaped and maintained greenery, city centers that are smoky and warm at night and cool and quiet in daytime. For Billi, China is home, but also not – her family and her roots are there, but her life is in America. For me, my family and my roots remained in Sri Lanka, but my life – my school, a house, friends – was in Zhongshan. China, for both Billi and I, is a home that doesn’t completely feel like one – but for entirely different reasons.

The Farewell captures this struggle between familiarity and foreignness through the most empathetic of lenses, much of the credit for which goes to cinematographer Anna Franquesa Solano. The combination of intimacy and strangeness Billi’s entire family feels towards being reunited after many years, the cultural conflict between individual integrity and loyalty to the collective, the disconnect between a place as preserved in your memories and its present state – Solano treats the movie’s many dualities with the utmost respect, showing us enough emotion for it to resonate, but keeping a respectful distance so as not to cheapen the film’s poignancy.

Explaining hers and Solano’s decision to shoot the movie using a wide aspect ratio to capture the family as both a unit and as individuals, Wang told IndieWire, “The family is performing for the sake of Nai Nai… You don’t really want to cut because you want to see the fumble, you want to see the natural shifts from laughing to losing that smile and being caught in their performance.” These lapses in performance are evident as soon as Billi arrives at her grandmother’s apartment, where her extended family’s reaction to her unexpected arrival is all the abundant when captured in a single frame. Eight family members turn their heads towards the door simultaneously, watching in dismay to see how much of their secret Billi might give away. Seeing their collective relief when Billi reveals nothing, watching seven adults simultaneously loosen their shoulders and continue breathing, is both comforting and comical.

In this and in all other scenes in which the entire family finds itself in a single frame. Solano wanted them arranged in “a mise-en-scene which felt staged.” Their deliberate and careful placing emphasizes the tension within the family, not just because of Nai Nai’s illness and the strain of keeping it a secret, but also because of the effects of this strange and bittersweet reunion on their respective relationships. Later on in the movie, in a scene at a restaurant, the family gets into a heated verbal sparring match on the subject of identity. The combination of frames that include the entire dinner table or sections of it with individual close-ups of family members is edited sharply to match the pace of the argument and elevates the tension in the scene.

But just as there are moments of unfamiliarity and awkwardness, the group also shares several moments of effortless intimacy, the kind that can only occur within a family. After they narrowly avoid Nai Nai finding out about her diagnosis, the film cuts from a frame of the family sitting despondently and silently in a hospital waiting room, to them escorting Nai Nai home, to a close-up of Nai Nai’s sister’s dog, Ellen. After repeated requests to “Sing for us!”, Ellen finally gives in, and we see the entire family gathered in Nai Nai’s living room, laughing at the dog. For every shot of the whole family that is permeated by the weight of their secret, there are those rare scenes in which they exhale, sharing the lightness of a momentary distraction.

The film is also concerned with the friction between individual action and loyalty to a collective, with the latter being foreign territory to Billi. Her opposition to keeping Nai Nai’s diagnosis a secret and the rest of her family’s insistence that she do so emphasizes the deeper cultural divide. Her uncle Haibin tells her, “You think one’s life belongs to oneself. But that’s the difference between the East and the West. In the East, a person’s life is part of a whole”. This is the basis of her family’s choice to keep Nai Nai’s diagnosis a secret – they owe her this sacrifice, they will all bear the weight of this horrible truth so that she does not have to.

Billi is, from the outset, at odds with her family’s choice. After a particularly stressful day, she walks down a street and towards the camera, looking right past it. The lighting in this scene has a bluish tinge to it, and Billi walks in slow motion, her conflicting emotions and loyalties clear on her face. Later in the film, Billi single-handedly prevents Nai Nai from learning about her diagnosis by running to a hospital, obtaining her test results, and forging new ones. The same slow-motion walking scene is repeated, albeit with the entire family except for Nai Nai. With identical lighting and pacing to the initial scene with just Billi, in this one, her relatives’ identical expressions are a visual reminder of a more extensive support system and a deeper bond. They are suffering, yes, but they are together.

A review of The Farewell in Vulture states, “[o]ver and over again, everyone in the film realizes the satisfaction that comes from being part of a shared consciousness and the pain of being cut out of it.” Billi beginning to act as part of a unit rather than by herself is not marked by much fanfare. Instead, it sets up as inevitable growth in an unexpected direction.

The Farewell also touches on the difference between memories and reality, explicitly concerning places. Billi’s memories of China are decades old, and the places she remembers best and has likely romanticized in her mind are drastically different upon her return, which makes her feel an immense sense of loss and estrangement. During an argument with her mother, Billi connects the loss of their former homes in China with the impending loss of her grandmother. The gradual disappearance of any tangible connections Billi has to her childhood leaves her desolate and disoriented.

Driving around Changchun with her parents and grandmother, Billi remarks that a particular area looks familiar. The area, marked by a colourful rainbow structure, is filmed how Billi would see it as she circles around it in the car. She wants to see more, but Nai Nai insists that there is no point, the neighbourhood has changed so much that she doesn’t recognize it. The camera switches angles to focus on Billi from the back of the car – everyone else is facing front, but she has turned around, and her eyes roam in the direction of the old neighbourhood for a long time.

The idea of home in The Farewell is a complex one. There is no solution offered at the end of the movie, which relies solely on the preserved tension between the intimate and the unfamiliar to establish its mood and to add depth to its plot. A whole family arranged within a single frame, a visual depiction of the importance of community, the destruction of childhood homes and the memories associated with them – cinematographer Solano offers visual cues and representations for each emotional contradiction with an explicit understanding of Wang’s story and its characters. A story about home can never be a simple one, especially for those of us who have left one behind in pursuit of another. The Farewell shows us it doesn’t have to be. 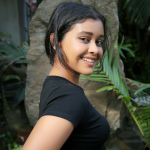