In the four months preceding the release of her latest short film, Sayna Fardaraghi tweeted a series of behind-the-scenes footage and photos from a set constructed by herself and her classmates, buoyed by an infectious enthusiasm for the newly unfolding creation at hand.

It would be her first since the nebulous letters from Greece and second since L’Observateur, the wildly impressive and gamesome adventure in people-watching à la Jeunet’s Amélie that propelled her between press and festivals in the almost eleven months of old. For her next opuscule, Fardaraghi teased new directions. She could no longer promise the emblematic ebullience that once emanated from her previous work, no, this time around would be different. A new canvas and palette splashed with more Klein blue than pretty pinks and verdigris. She couldn’t help but be apprehensive of the reception to come.

Four days after the release of her newest short, WAITING, our interview officially commences at 4:44 AM –  a revelation that comes as a shock to the 21-year-old London and Brighton-based creative even after a week of defied expectations. I figure it would’ve been 11 AM on her end – a generous guesstimation that only springs to mind two hours into our conversation via Twitter DMs, not that it’s terribly important anyway. Fardaraghi is already at work, pausing to walk me through the past week between productive spells.

The past week has been pretty triumphant for you, which has been really exciting to watch. You released your latest experimental short, WAITING, which garnered a lot of attention (not to mention a nod from Barry Jenkins himself), the music video you directed was selected by the London Music Video Festival and later broadcast on television in the Czech Republic, inclusive of other personal feats. After all that, my first question (and the most important one on the list, I think) is, how are you?

Thank you! Honestly, it’s been crazy! I really, really wasn’t expecting any of this at all, and I’m so grateful and ecstatic about all of it. I’m still buzzed, so I’m trying to keep myself together.

What’s been your favourite part of last week, if any?

Honestly, it’s the amount of love that came towards WAITING. People were so kind and had a real emotional connection with it, which is crazy to me because it was such a short project, and I was really nervous about sharing it! But also, Barry Jenkins’ seal of approval, which had me dancing around the house for a good 5 minutes.

You’ve spoken before about your work being influenced by nostalgia and fueled by personal stories, but there’s also this obvious simplicity threaded throughout your filmography that manifests via isolated, seemingly insignificant actions. Instead of the huge life-altering event, you focus on the necessity of breathing, observing the world or writing the letter, which I think allows so many worldwide to connect to its messages. Is this a conscious choice you make when approaching the page? You’re welcomed to walk me through your writing process if your response expands beyond the scope of the question.

Oh, definitely. My aim is always to make a connection with my audience and try to find a concept or an idea which ties a room full of strangers together, [help them] find a shared sense of understanding and belonging. I feel like it’s so important for me to understand my viewers and to show them that I do? So my concepts always follow that. I think when I’m writing it’s more about feeling to me. I feel very much because that’s what comes naturally, rather than coming up with complex stories, which isn’t my forté. (I’m working on improving that though!)

Then I’m looking forward to that; I’m sure you’ll do really well! You already do a great job with reminding us to not only pay closer attention but about the importance of doing nothing, or at least very little. In WAITING, there’s some incredible symbolism for the grand pay off that only comes after the pertinent pause – verdure springs into existence around the actors and props, and a little boy cracks the lid of a mason jar slightly open, ready to free the butterfly creeping out of its cocoon inside it. Especially at a time like this where the world feels like it’s slowed down much, how would you describe your relation to productivity?

Thank you! I think over the past year; I’ve really upped my productivity. It has been great, but I realized my schedule was hectic, I had so much going on one day after the other that I ended up forgetting about taking care of myself. So having the world kind of stop and force me to not do anything has kind of made me realize to take time for myself and that productivity does not equate your worth. There’s no morality in productivity, and your worth isn’t based on how much you accomplish.

What does a day currently look like for you?

At the moment, I’m still bombarded with university essays, so I wake up, do some stretches and meditate if I can, bake a croissant and get everything out the way in small steps. But also taking time to immerse myself in videos & films that I’ve been meaning to watch, I’m trying [to] get myself inspired and in my own element again as I’m dying to play around and make some fun stuff once this is all over!

Let’s chat a bit about my favourite film by you (thus far) – L’Observateur. I rewatched it two days ago for my birthday as a sort of gift to myself, so thank you again for putting something so beautiful like that out into the world. There’s this scene towards the end that has stuck with me ever since I first watched it where our sights are trained on [the main character] Eden, who, upon realizing she’s being watched, redirects our attention elsewhere. It’s my favourite scene because the watcher becomes the watched, though only for a second. Or in other words, the artist becomes the muse. Do you harbour any (secret or not-so) aspirations towards being on screen?

Ah, happy belated birthday love! I’m so glad you noticed that it’s exactly the meaning I wanted to push forwards! I remember I used to, I really admire artists who are the star of their own work because their work truly embodies them not only physically but creatively, but I’m quite camera shy and am much more comfortable filming. I’m hoping to someday step in front of the camera but for now, I’ll keep behind!

So there’s a possibility of that happening! That’s exciting. I hope that when you do take that leap [on screen], it expands your perspective just as much behind the camera as it does in front of it. And that brings us to the end of our interview, thank you for taking the time to chat with me! I appreciate it so much, and I hope there’ll be more opportunities like this between us in the future, albeit by more conventional means. I just have one last question, and that is – can you recommend one of your favourite short films to whoever’s reading this that is perfect for escaping the tedium of quarantine?

Of course! Thank you so much for being such a wonderful interviewer. I’d probably recommend WAITING, sure it’s my new one that’s an experimental piece rather than the narrative I was hoping to shoot this summer, but I think it’s a warm hug that assures you [that] things will be okay, and with time and patient waiting we’ll be back to the outside world again.

Naomi Alexander invites you on a worldly exploration through the lens of short films every month, weaving tapestries where life and art collide. Back on Twitter, though, she’s normal. Do not follow her @miyaisms for tweets about films. 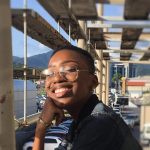