Today, I have the pleasure of speaking with Stephanie Williams, the creator and writer of webcomics Parenthood Activate! , BUT WHAT IF THOUGH and recently, Living Heroes. An amazing freelance writer who currently writes for SYFYFANGRRLS, and MARVEL VOICES LEGACY.

Portia Lightfoot: Thank you for taking time out of your day to talk to me today. So, let’s jump right in. Tell us, a little about yourself, you’re comic, and the content, you create?

Stephanie Williams: Yes, of course! My first webcomic Parenthood Activate! ended up being created from a failed Kickstarter. We were trying to get a graphic novel made for a story for this character named Braxton. She was a queer black mother, and unfortunately, it failed, and of course, that sucked. laughs But I knew that I wanted to make comics, and that lit a fire under my butt. I was tired of waiting to have things work out in this picture-perfect way. I just wanted to do it in the best, most feasible way to do it by myself.

When I spoke to Regine Sawyer, I remember this day perfectly because I was sitting outside of Walmart, and it was that type of call when you call a friend, and you end up being on the phone for an hour instead of going inside the store. I spoke to her and expressed everything I was feeling, and she said. “Why don’t you do it yourself? And I said, “You’re right.”

There was an artist I worked with before for Misty Knight’s Uninformed Afro, but the work she did for that never came to fruition because that podcast ended so abruptly. So I reached out to her and told her my idea, sharing stories about motherhood and stuff that my son does, and I knew these were the stories that people wanted to hear. Why don’t I apply this to a webcomic and tell the story that way instead of using reaction GIFs and videos? I can write out what I want to see and tell the story that way.

I reached out to Sarah Macklin about it, she loved it, and she came up with an art style she thought fit best. She showed me the sketches, I said yes, and it took off from there. A couple of weeks later, I was at a baby shower and saw that O’Neill Jones had her commissions open. So I slid in her DM’s.

The first script that I gave her involved Vixen and Batman. Batman, thinking every time Vixen changed her hair, it would be a part of her power set because Batman loves his contingency plans. After that, it just took off, and the 2nd page that came out was a one-off for Living Heroes.

I was watching Living Single and reading some old X-Men Comics at the same time because usually I’m multitasking.

Then I had the idea about Misty Knight who used to be roommates with Jean Gray, so I thought if Jean Gray died again, then; Misty would have to move in with Storm and Monica. When I posted it, I didn’t know it would get the kind of reception it did, and the next thing I knew we were doing a Kickstarter.

Portia Lightfoot: Have you always wanted to get into comics?

Stephanie Williams: Yes! Since I was in first grade. I remember I ended up winning an art contest because I did a short comic about a dinosaur, and my teacher and I think the dinosaur ate my teacher by the end.I adored that teacher, she was my favorite, and she thought the comic was funny.

I then got sidetracked because of life, and as you get older, people tell you,

“You can’t make a living doing creative stuff.” So, science was something else I loved. I ended up going to school thinking I wanted to be a medical doctor. I got into the research aspect, graduated, and started working for a hospital down in Charlotte, North Carolina in their Electron Microscopy Lab.

I had to take pictures of very-small molecular structures in your kidney and muscle tissues to try to find disease processes for lupus, cancer, etc. And you have to find what story that tissue is trying to tell.
Finally, I was able to start podcasting and writing for places like SyFy, getting comfortable with my voice; and how I told and delivered stories.

One day I was kind-of forced to try this full-time, and thankfully it worked out, but at first, it was touching and go where I thought I would have to go back to the hospital, which is something I didn’t want to do and thankfully didn’t have to.

Portia Lightfoot: I saw on your website that one of your favorite quotes is, “
“If there is a book you want to read, but it hasn’t been written yet, you just be the one to write it.” — Toni Morrison
Would you say that, that quote helped you to form the career you have today?

Stephanie Williams: Oh absolutely, because that’s Living Heroes, that’s Parenthood Activate, that’s BUT WHAT IF THOUGH, that’s everything I do. That’s the edits that I make sometimes you know? If It doesn’t exists and if I can make it exist then I’m going to do that. Not to sound selfish or anything, I like to think that when I create stuff it’s because I want to see it, and I’m always happy that it resonates with other folks but when I think of creating, it’s my outlet and I should find joy in doing that. I usually try to make the art that I want to make, instead of the art that others tell me that should be made.

Portia Lightfoot: Is there anyone who inspires you?

Stephanie Williams: Yes, I have always been drawn to Dwayne McDuffie and the way that he told his stories with super heroes. The human element was always present and that’s something I always loved. Just speaking as a black women you know folks always say I’ve been able to connect with superheroes in that way.
It always makes me flinch a little bit when a black woman does something extraordinary then all of a sudden she’s super human, and I always feel that’s a slippery slope in forgetting that this person is very human still because they have moments of weakness, they don’t always feel strong, they get angry, they’re petty sometimes and that’s okay.

Dwayne McDuffie always centered the human aspect for these heroes and that’s what I’ve always loved and appreciated. Because art imitates life and I think it’s very important to keep reminding folks they are amazing but also they are still human. Unless they are aliens or something, but even still aliens have feelings too.

Another is Octavia Butler because I remember reading Parable of the Sower in high school and thinking why this isn’t on the curriculum? And I remember being in the lab listening to the audiobook version of that, and this had been the year Trump was elected, and I had to rewind it and be like, wait, she already predicted this a long time ago. Sometimes you have to read her writing a couple of times over, because it won’t connect right away because it’s that deep. I hope that I’ve been able to infuse both of them in the work that I do.

Portia Lightfoot: Do you have any advice for new content creators or comic book artists?

Stephanie Williams: Don’t be afraid to start. I don’t want to oversimplify that because money is the root of a lot of things but don’t be afraid to start and look out for artists to align yourself with people who are trying to do the same thing. Get your thoughts out there, open that Google doc, notes, etc. Get those thoughts out; even if it’s something you don’t plan on publishing, get them out there.

My point is I feel like everyone has some creativity in them. Your story does matter. I know there are times when we compare ourselves to others and think we can’t make something as amazing, but your story is just as important. If I didn’t have that conversation with Regine, I don’t know if I would be making webcomics right now. I would probably be twiddling my thumbs, scared, and just starting.

Portia Lightfoot: As an artist and content creator, sometimes we experience burnout. Could you tell us a bit about what keeps you going?

Stephanie Williams: Yes, when I know I’m experiencing burnout, it’s when I’m not having fun anymore, and it feels like a chore. So in those moments, I leave it alone to go, do something I enjoy doing, reading comics, playing video games on the Switch, watching TV, etc.

I always find in those moments when I’m experiencing burnout, doing absolutely nothing helps. It’s difficult not feeling guilty when we’re not doing anything because we’ve been hardwired to think if we have nothing to do, then we’re wasting time.

Portia Lightfoot: And finally, do you have anything new in the works that’s coming up, or anything you’re looking forward to doing next? And What do you hope to accomplish in the future?

Stephanie Williams: I have a horror comic in the works with another artist that’s on the way. It’s focused on black women’s reproductive health. We see that narrative in comics, but not really present, and I want to see more of that. Again, referring back to Tony Morrison, go ahead and make the thing you want to see.

I’m hoping that I have more opportunities to write comics. I really would like to write a Monica Rambeau limited series. The energy is there because everyone is watching WandaVision, and I love that because the character deserves that spotlight. Plus, she’s a favorite of mine.

The winner of our giveaway is ‘@RachaelEWrites’! 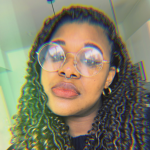